So confident in the knowledge that a pair of snow chains were onboard, we hung a left in Kranjska gora and set off up the road leading to the Vrsic pass. We were starving by this point so before getting deep into the challenge ahead we stopped off for some breakfast in a lay by. Whilst consuming a bowl of granola and yoghurt i was watching the road to see if there was much traffic moving as i thought this might give an idea of whether the road was being used much by locals, figuring that after the previous nights snow fall it might even be shut completely. I saw a two or three cars descending and a couple heading up, so figured that the road seemed to be open and if there were cars coming down then presumably they had come over from Bovec.

So we set off and began the ascent, after about a kilometer i realised that the cars i had seen were most likely from the few homes and a couple of hotels that lurk in the foothills before the road gets really steep, so perhaps they hadn’t come right over the pass at all….?
A bit further along the road began to twist and wind in the way that these mountain passes do, however this road was a bit different , every bend in the road has been skillfully and beautifully crafted with cobbles, but they’re not like the classic UK cobbles, these are more reminiscent of something Roman. 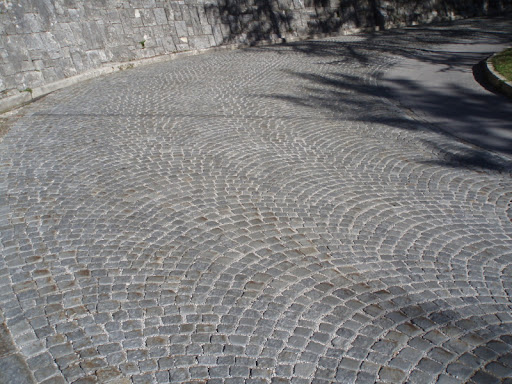 The condition of these massively hard wearing turns is a testament to the craftsmanship of the Russian prisoners of war that were forced to build them. It truly is a masterpiece if a road could ever be referred to as such.

There was a tourist attraction we were looking out for while we continued climbing and twisting and winding, its a miniature chapel that was built by the Russian POW’s in memory of over 100 of their comrades who were killed in an avalanche whilst constructing the road. Eventually we came across it and stopped in the lay by opposite to have a look around.

It a beautiful structure and has recently been restored to its original glory. Unfortunately we couldn’t go in and have a look inside, (not sure if it might be open in summer?) but nonetheless it was well worth a short visit and it felt kind of right to be paying some kind of respects to the people who grafted and lost lives building the road we were enjoying as tourists.

Here’s a pic of the chapel

We’d looked at a map the previous evening and decided we wanted to leave Slovenia from somewhere near where we entered as the roads and scenery appeared as though it would be more interesting. As time was getting on a bit by this point, we set off up the pass thinking we could get over to Bovec find a spot to camp and head into Italy from there the next day.
We could feel it was getting colder and colder the further we ascended but it became very apparent once we hit the snow line (presumably this was at around 1000m as it had been at Lake Bohnji) It started as a thin coating, then turned into a decent covering, then five minutes and a few more tight turns later it was proper snow, the sort where you cant define the outline of things anymore and everything looks like its got a duvet laid over it. 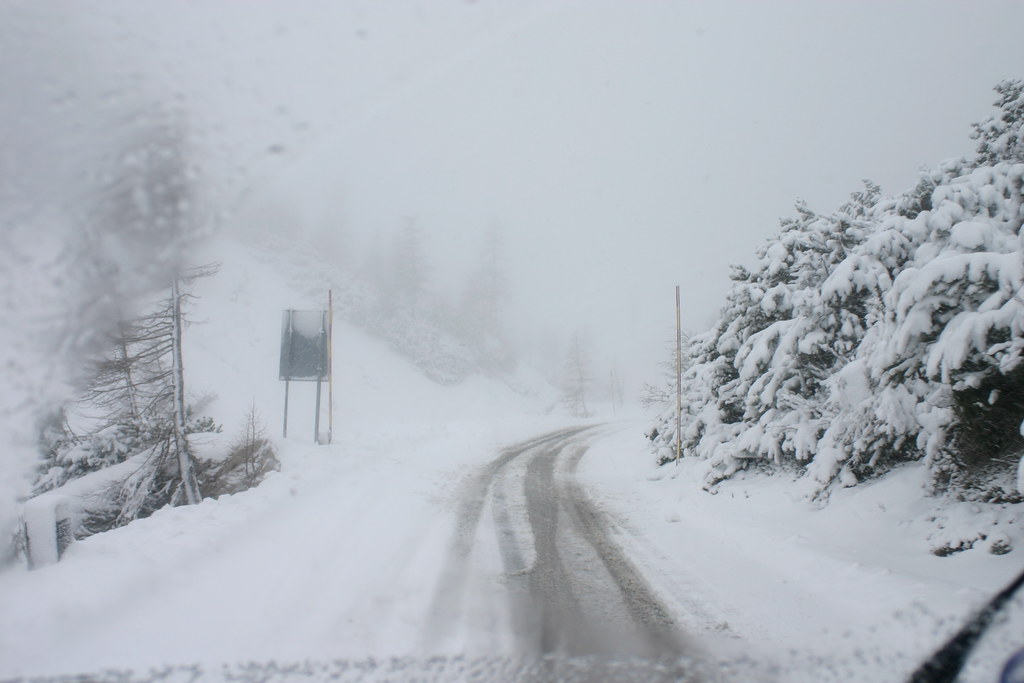 Another five minutes and some more turns had it start snowing, which then became heavy snowfall requiring wipers to be able to keep the windscreen clear, by this time the road was completely covered in snow and the falling flakes were constantly adding to its depth. 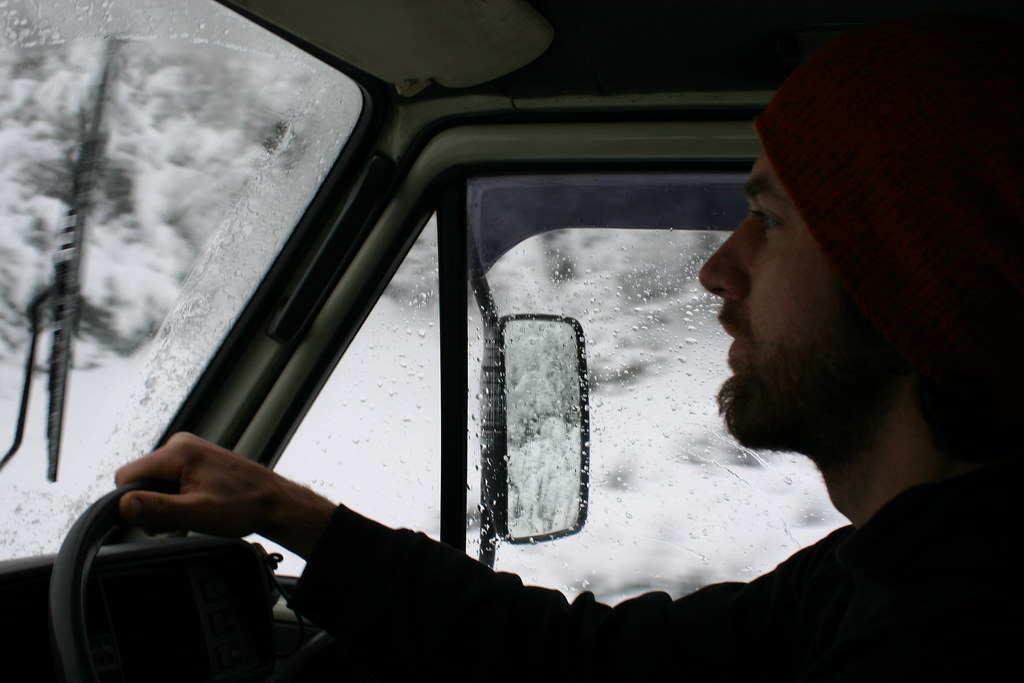 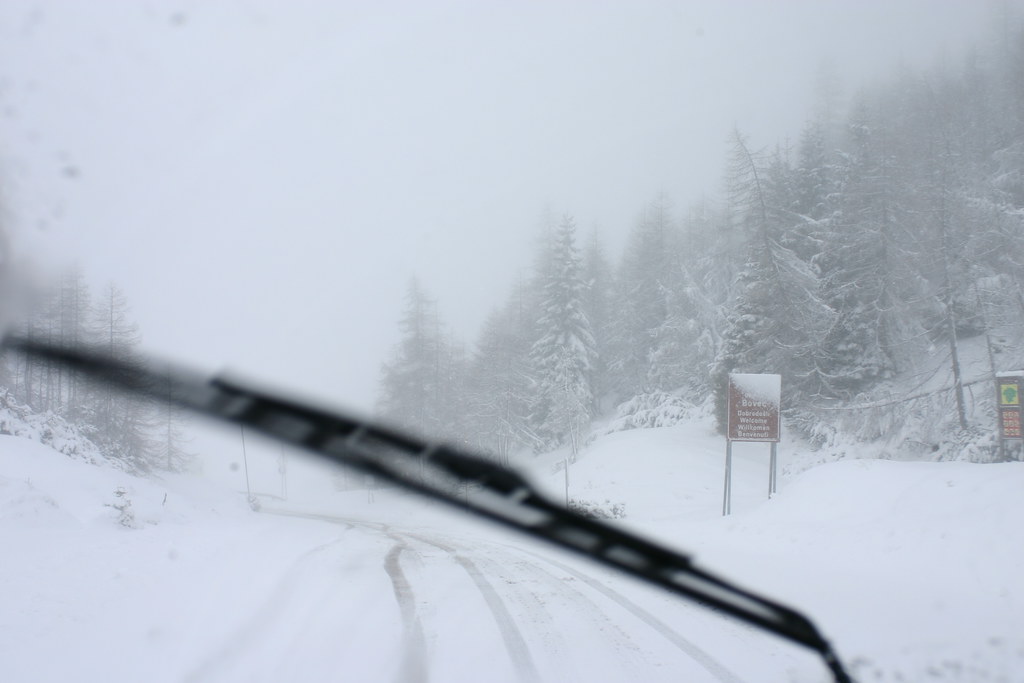 By this point we figured we must be nearing the top as the pass at its highest is 1611m, so as long as the conditions didn’t get any worse than this we should be totally fine. The van was performing faultlessly, effortlessly making headway through the 6″ of snow that was on the road even though i could feel it was getting a bit slippery under tyre (i had been putting down a bit of power here and there when it was safe, just to test the break away point).

(as a side note here – i’d just like to say that my van has BF goodrich All Terrain tyres, all of which were running full pressures and i didn’t get even the slightest sniff of a loss of traction unless i made it happen – conclusive proof that you can drive a syncro over a snow covered mountain alpine pass in safety and comfort without having to have ‘winter’ tyres – im sure that will be interesting to certain people…..)

Sure enough the top of the pass arrived and as there was space to park thought we would jump out and have a quick nosey around.

This is where we parked 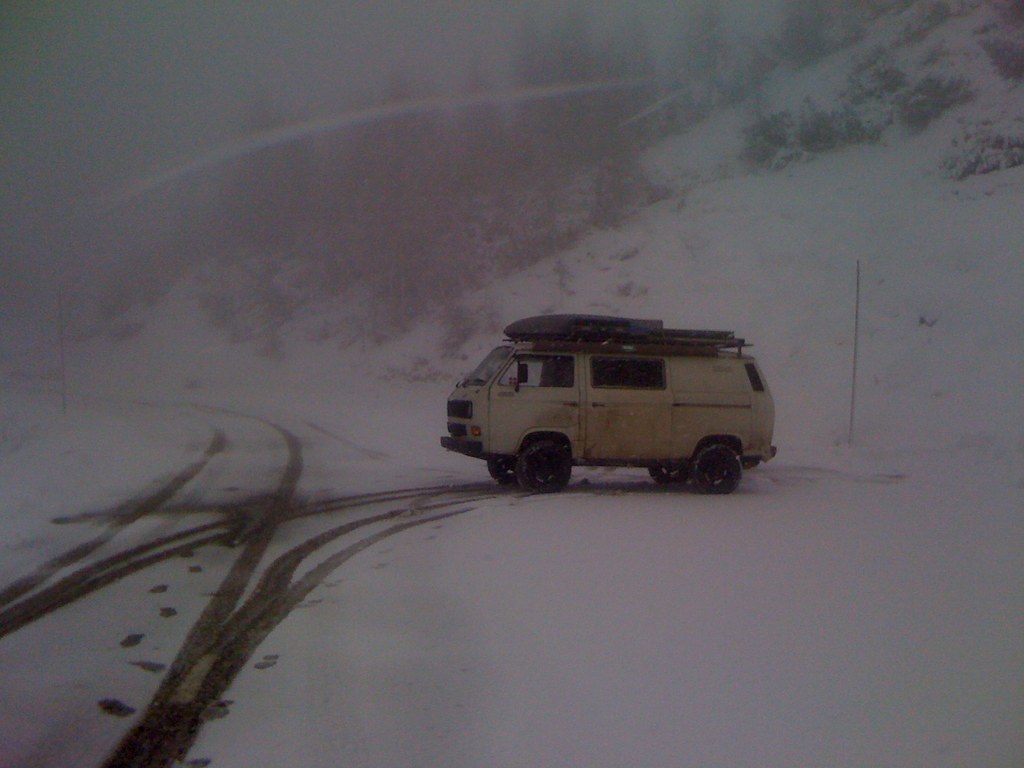 This didn’t last very long, it was absolutely baltic outside of the van and the wind was howling across the top of the mountain.
In fact it was blowing so hard you couldnt even look into the wind as the snowflakes felt like needles hitting your eyes. We swiftly jumped back in the van and drove towards the start of the descent…… 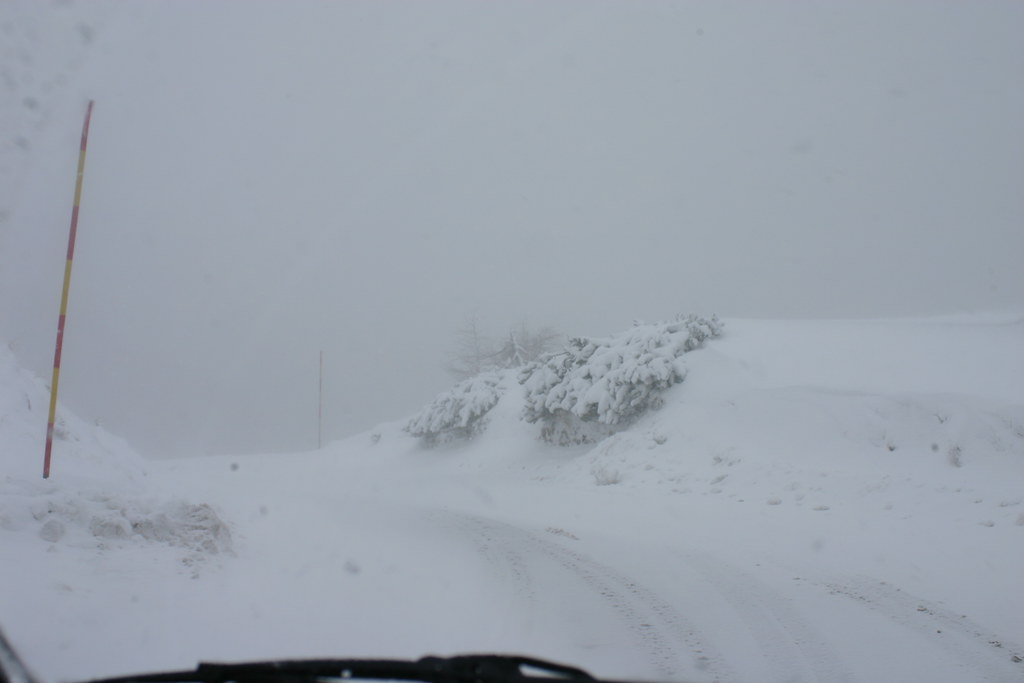 The southern side of the mountain was being ravaged by the weather in a fashion that made what we had travelled through to get to the top seem mediocre by comparison. It was a complete white out, visibilty was perhaps 10m at best and the snow was clearly being blown about a lot making some chunky drifts.

So given this new outlook on the Vrsic pass we reluctantly did a 180º turn and began heading back the way we had come. The most annoying thing about this was that it felt very much like the van would’ve made it, especially with the snow chains as a back up, but the visibility for driving on a road with very high sheer drops off the side and no crash barriers seemed like suicide. Not to mention getting properly stuck and being there for however long it took for someone to find us (Spring possibly).

So off we went back towards Kranjska Gora, never mind, we tried our best and got to have some fun in the first snow of the trip so far. (as it turned out it wouldn’t be the last that’s for sure) This left us with our exit route from Slovenia being far further north than we had wanted, not a problem as such, but meant we had a bit of planning to do whilst on the move. We had to decide where we were going to head towards for the evenings camp spot and make sure it would still keep us on route (roughly) for the direction we were heading.

We settled on a route towards an area in the Dolomite mountains which wasn’t all that far to drive, about 150kms (a few hours max) as we were running out of daylight by this point.
It was a great drive as it turned out, the route through the Dolomites was very picturesque and took in some quite high mountain roads, we spotted a natural spring on the side of the road around half way, one of those ones that pours into a purpose built trough sort of thing for locals to get water, so we filled up our water container with some lovely mountain water and stopped for some lunch.
Another hour or so went by and we were nearing our chosen area so attentions turned to finding the ever elusive camp spot for the night. After our experiences in Croatia and the minefields we had become a bit more vigilant at making sure we found somewhere before sundown, so with still a decent amount of sunlight left we began scouring the map as we drove for small roads leading off into the wilderness.
Harriet had picked out what appeared to be another off the beaten track mountain pass that travelled through an area of National park as a destination so we peeled off the main road and started a descent into a valley. At the bottom we reached a bridge that crossed the valley over a large completely frozen waterfall, they really are a sight to behold when you can tell that in the summer months it would clearly be quite a torrent gushing over the top and crashing into the crevasse below, but in winter its like a moment paused in time, all the water is still there but completely motionless.

Our route carried on up the other side and began to climb quite steeply again, twisting and wiggling, when we broke out of the tree line and entered a village called Cibiana Di Cadore. This is a beautiful little village perched on the steep sides of the mountain, the foot of each house being at the roof height of house below them, the mind boggles as to the difficulty of building homes with the plots being at 45 degrees! Smoke rising from chimneys, enormous woodpiles adorning the front and sides of most properties, these people were certainly prepared for winter.

Around a kilometer outside the village after some more climbing and a few very tight bends everything had turned to mountains, snow and dense evergreen forests and as we rounded one such acute bend we spotted a clearing on the right. It looked perfect, slightly tucked away, far enough but not too far from the road, nice and flat, ideal. It was covered about 6″ deep fresh powdery snow and the whole place looked like a picture postcard, the Croatian minefields were a distant memory, this time we had struck gold!

Here’s some pics and a map location should anyone be interested in finding it themselves, is thoroughly recommend it for a stop over. 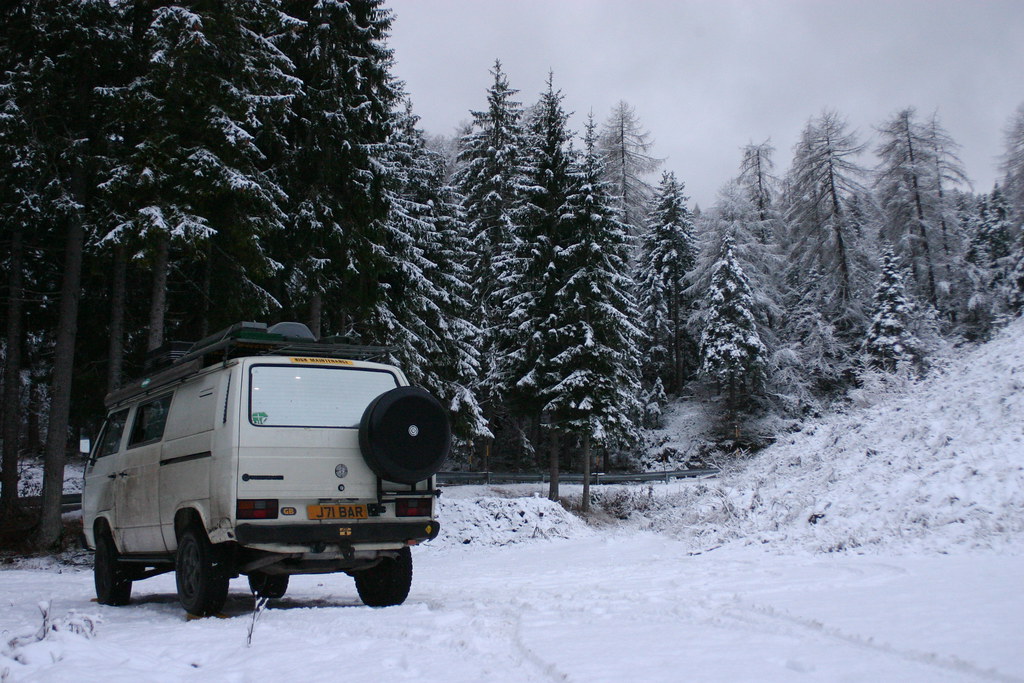 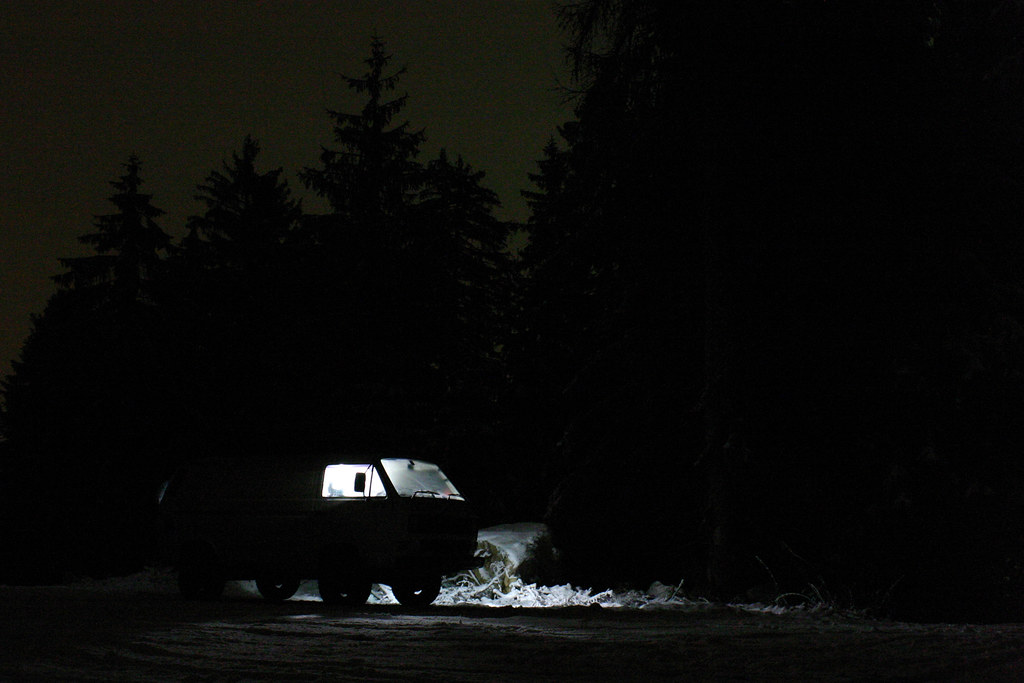 We worked out the next day that this camp spot is at around about 1500m, it was certainly very cold overnight, the photographs i took once night had fallen were a very chilly affiar and that was at around 9pm, i’d estimate that the temperature dropped to around -10 – 15ºc that night. We were toasty warm though with the heater running and a belly full of food.

As usual we did a bit of planning for the next day and we decided that as we were so close it would be a shame not to go and see some of Venice……seemed like a good idea anyway…..

So off to sleep looking forward to driving the rest of the mountain pass in the morning.