The next morning I woke up 20 minutes or so before my alarm. I felt quite awake so got up, grabbed the camera and went outside as it appeared as though the weather was a little better than the day before.

It was perfectly still, not a breath of wind but it was still very cold. I strolled down to the waters edge to have a look at the view across the lake. What i discovered when i got there was amazing! I rattled off a few shots then went back to the van to get Harriet up. She was already putting on her shoes when i got there and was a little but disgruntled because i’d not woken her up. Not phased i hurried her along as i had something to show her.

We strolled back down to the water and it wasn’t long before the fact i’d left her in bed was long forgotten. As the temperature had dropped so much and it had been raining overnight, all of the surrounding mountains had been layered with snow above about 1000m. The fog had cleared and we were presented with possibly the most breath taking scenery we had experienced so far. To say it was magical would be an understatement.

After taking a whole host of photo’s we got back in the warm of the van and put some breakfast together along with the obligatory cuppa. Over breakfast we decided that we would stay at Bohinji for the day and walk round the lake, we had seen on a map that there was a trail that went all the way round so we would be able to get back to the van without any back tracking.

We got our stuff together and set off for our stroll. There still wasn’t another soul around, we had the entire place to ourselves. The reflections on the lake were so near perfect that i couldn’t resist skimming a couple of stones across its surface, we stayed for a while to watch the increasing circles as they slowly faded away and the mirror like picture was restored to its former glory.

We continued on round and at the far end of the lake we reached the main campsite (which was shut of course). We had a good look around the pitches located near the water for future reference in case we manage to get back there during spring/summer at some point. The campsite is well equipped with water, sinks, washing up stations, electric hook up points and nice flat pitches in amongst a little tree cover. Some of the pitches are literally meters away from the water, must be brilliant in the warmer months.

We carried on crossing a bridge over the river where it enters the lake. This is the river that flows down from the Julian alps, over the waterfall that we visited the day before. The water is crystal clear, and like various rivers in Slovenia it has a particularly turquoise appearance. 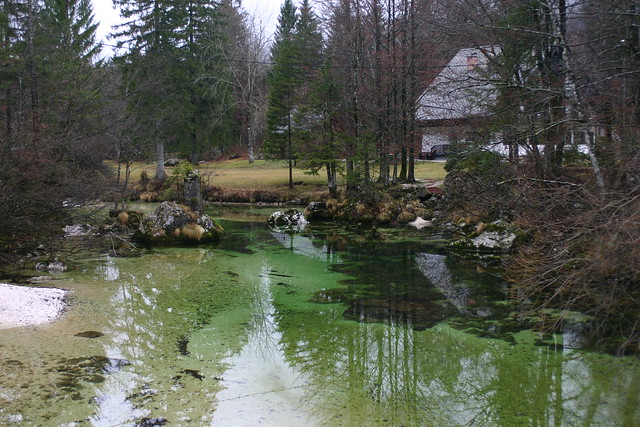 The weather was still holding out but as you can see from the following picture it wasn’t far away. 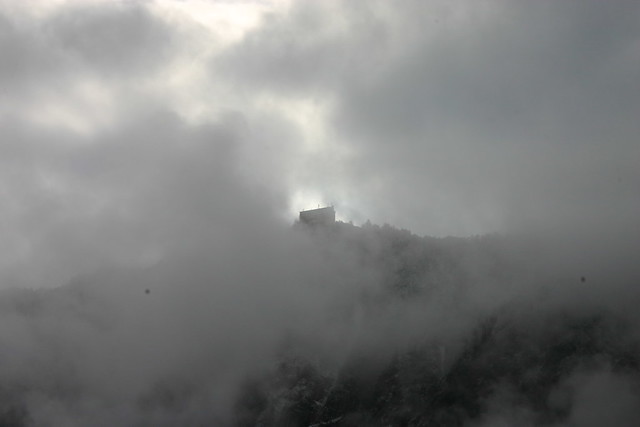 The building that can be seen high up on the ridge is a lift station (the eagles nest) for a cable car that climbs 1 vertical kilometer. There are hikes from the top of this cable car that can take you up far higher and give spectacular views across the alps and of Mount Triglav, that gives it name to the Triglav national park. We couldn’t take a trip on the cable car even if we had wanted to, that was shut also! (spot the recurring theme)

Here’s a few more pics from the north side of the lake. 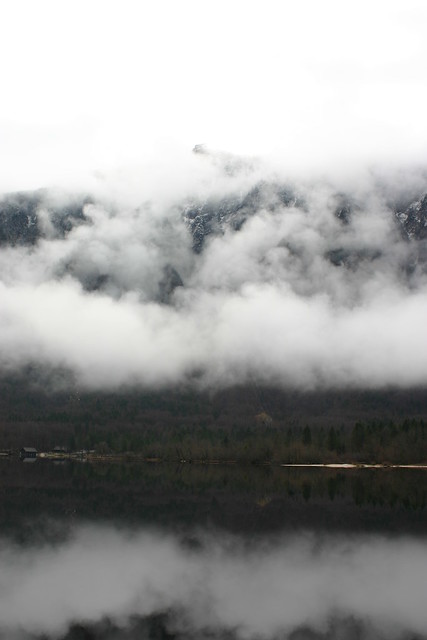 We had passed a sign earlier just after the campsite that said the main village (at the southern end) was 1.5hrs walk away which turned out to be pretty accurate, after strolling through a mix of autumnal leaf littered forest, rocky outcrops and wide open forest style tracks before we reached the village around 11am. 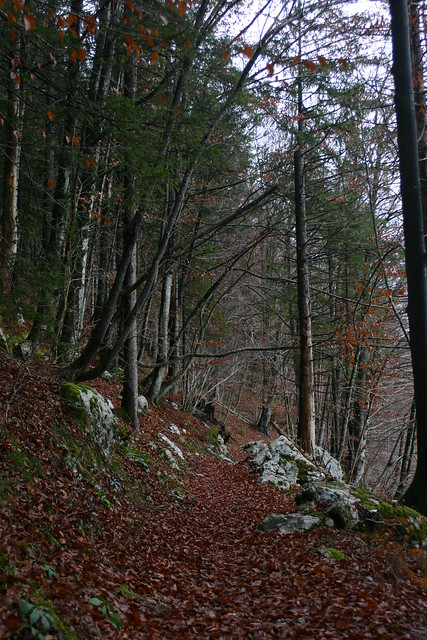 It seemed as though the conditions had become even more still at this point (if that’s possible) which gave us the opportunity to grab these pictures. 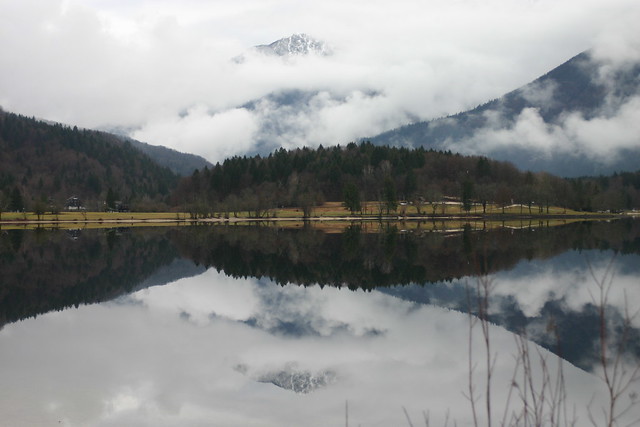 We grabbed a drink from the tiny supermarket in the village and stopped for a short while by the bridge over the river at this end of the lake digesting the magnificent surroundings we had been presented with. Its amazing how a situation like this can make you feel so humble. For me that’s the reason for coming to places like this and the reason for having a vehicle that can make it possible.

Once we had got back to the van and had some lunch we decided to head off for a mountain road we were keen to drive. Its called the Vrsic pass and links Kranjska Gora with Bovec via a 1611m twisting pass through the mountains.
We figured that as it had snowed the night before that the views from the pass might be really good, winter wonderland kind of stuff.

We headed off towards Lake Bled (yet again) as that was our best route to get to Kranjska Gora and after a few hours we had nearly arrived. By this time we could see the mountain range we were about to attempt driving over, it was shrouded in grumpy pregnant looking clouds and through what clear bits there were in the weather we could clearly see quite a large quantity of snow on the higher levels of the mountains…..hmmmmm…..it was feeling a little touch and go at this point.
Not deterred by the conditions (encourage to be honest) we carried on until we reached the town and found the turning leading to the pass.

At this point i should mention that its a good idea to sort out buying your snow chains well before you think you might need them (you are required by law to carry them on many roads in these parts of the world during the winter months). We had ours with us for this attempt on the Vrsic pass, but it was a bit of an ordeal finding them. We actually spent an entire day in Italy before reaching Slovenia hunting them down. It does help if your wheels are of a sensible size, but finding chains to fit 235/70/16 tyres would be more difficult at the best of times, but in Italy (neither of us speak any italian) and having no idea where to even start looking for a motor factors or shopping center, well lets just say it was a bit complicated.

After texting an Italian friend of mine (thanks Mel) and her sending a phonetic “can i buy some snow chains please” bit of Italian we set off in search of a shopping centre in a town an hours drive from where we were. We found one on a industrial estate, massive place. We went in, searched everywhere and couldn’t find any the right size……damn…….but just as we had given up and were on our way out Harriet spotted a “Bosch” sign in a tucked away store we hadn’t noticed, it was a hardware store and HALLELUJAH they had the exact size chains we needed.

“Phew” and we didn’t even have to break out the ‘Italish’ / ‘Engliano’ ….result!

So the moral of that story, if you’re going away in the winter, buy some chains before you leave, especially if you’ve got unusual size wheels or you’ll end up wasting some time trying to find some like we did. Unless you fancy the challenge, as looking back on it, the whole thing was quite funny really. But it always is when you look back at it isn’t it…..