After an hour or so of driving along the winding road from Plitvice Jezera the sun was long gone and the heavens had opened. The road markings on most of these backwater Croatian roads are very faint at best, so this particular road was getting harder and harder to drive with the conditions, so we decided we needed to find a wild camp spot as soon as we possibly could. We pulled over and checked the map and picked an area about another ten minutes up the road, it had some large areas of forest that seemed as though it might provide a bit of cover to hide in.

So we set off again and ten minutes later we were peering into the darkness hunting out a way to get off the road and into somewhere suitable to park up. We spotted a forest track and pulled in. We could see that about 100m down the track that there was gate, so we pulled off the side of the track a distance away from the gate to make sure that any early morning forest vehicles could make their way past if necessary.

We had been parked up for a couple of hours, got quite comfortable, to be honest i was just about ready to get in bed when a vehicle pulled up behind us. “Damn it” i thought, how typical, we’re going to get moved on for the first time in the trip on the one night when i could really do with just crashing out.
A Croatian chap appeared at the window, he spoke no English but gestured to us that we shouldn’t sleep where we were and was making a “shooting a rifle” gesture also. Now, i had seen torches and heard rifle shots in the woods in the distance earlier on when i was outside relieving myself.
Fair enough, we didn’t really want to be parked in amongst a load of people out shooting with live ammunition, so we packed up, checked the map again. We saw a small road that led off through a small village which then went off into the wilderness, Perfect! Off we went.

We found the road, went through the village, over a railway track then the road turned into a dirt track. Then it turned into a much more bumpy dirt track and then we reached a junction of 3 tracks. At this junction there was a sign by the side of the road which had a kind of military stencil font and was of course in Croatian so we couldn’t read it, something felt a bit iffy about this sign and as was a bit of space to park this seemed as good a spot as any.
When we woke up in the morning ( i had set an early alarm to make sure we got away before any tricky public interaction might happen) i took another look at the sign, here’s the picture i took of it: 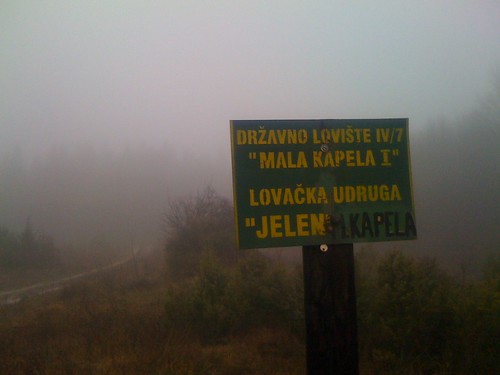 Something just didn’t feel right and I had a strange sense of urgency about leaving so we packed up quick smart and started making our way back down the track towards the village.
(As it turns out, the sign we parked by was designating local hunting grounds, that particular area is basically one huge hunting range)

A few hundred meters down the track there was a 4×4 pick up coming the other direction, they pulled in to let us past. “Phew” i thought, that could’ve been that awkward situation.
As we went past the vehicle, the occupants were giving us a very strange look, that sort of “where the hell have you just come from” kind of look. As we passed i noticed some red graphics on the bonnet which i didn’t quite see properly, however i did notice that the guys inside were all wearing military uniforms…..
Thank god, the last thing i wanted after the previous night was a complicated broken English conversation about why we had been been where we had etc. Another few hundred meters down the track there was a convoy of vehicles head towards us, the track was wider here so we were able to just keep driving, which i was very glad about as this convoy consisted of 5 troop carriers, 4 more 4×4’s, and an ambulance all with the same red graphics which turned out to be a skull and cross bones with the word “MINE” underneath it!!!!!! 😯 😆

Needless to say all of the troops gave us that same “what the f***” look as we went by. By this point i cant tell you how happy i was that my sense of urgency had got us moving when it had, i’ve no doubt they would have had a few words had we still been camped up.

Once out on the open road we decided to high tail it back to friendly Slovenia, the last 24hrs had been an experience not to be forgotten but not necessarily one i wanted to repeat in a hurry. We had timed our departure from Croatia so that we would arrive back at Lake Bled when the campsite opened and we were more than ready for a couple of cushy nights with electric, showers, civilisation etc.

Then we got to the Croatia/Slovenia border again….. This time we thought we would just use the motorway past Zagreb and go through the larger border and hopefully swerve an experience like we had before. So we pulled up in line with all the other vehicles (there were loads of cars this time as the border is quite large) and waited our turn. Things were moving quite quickly which seemed promising, then it was our turn.

The customs guys came over and did the usual checks, they asked a few questions:
Customs – “Where have you been?”
Us – “Pag island, Split, down the coast mainly” (didn’t think we would mention the war zone, and mine field… 😆 )

Customs – “So you haven’t been into Montenegro or Bosnia then?”
Us – “No”

Customs – “Are you sure you haven’t been into Montenegro or Bosnia?”
Us – “Yes, we are sure we haven’t been there”

Customs – “Are you carrying any drugs, weapons, anything you shouldn’t be?”
Us – “No, we’ve got nothing we shouldn’t have”

Whilst he is asking this he is looking me directly in the eyes trying to suss out if im lying or not, he keeps having a look for a few seconds and then says “could you pull over to the side please”…..Here we go again!

So they start searching the van, the first thing he opens is the fridge, which happens to have an unopened box of parsley right on top, which he removes with a look on his face like “JACKPOT!!” but quickly laughs and says something to his partner. It was obvious what had happened there, thought it was his lucky day! 😆 😆
They continue searching, same deal as last time, cupboards, door pockets, engine bay etc etc etc.
Whilst they are searching Harriet turns to one of them and says “sorry its a bit messy in there”. He laughed out loud and said “That’s not messy, you should see some of the Romanian cars that come through here, they’re like rubbish tips”
(respect to these guys though, they neatly and carefully put everything back where it had come from) Yet again, they didn’t bother searching or even asking what’s in the enormous roofbox?

Eventually he is satisfied with his search, turns to us and asks one more time. “Are you sure neither of you has any Marijuana?” staring us both in the eyes again.

I was quite pleased we were back inside the EU by this point and that we wouldn’t have any more borders to cross. I think we had already had our fair share of searches.

Eventually we reached Lake Bled and headed straight for the campsite, both of us couldn’t wait to get there to be honest. We took the turning, made our way round the lake, pulled up to the….gate….looked at reception…..no lights on….tried the door…..locked…………….Bugger. 🙁

I couldn’t believe it, gutted was an understatement. We called them to see if they were ‘really’ shut and they informed us that they wouldn’t be open for another couple of days…..ARRGGHH. It was at this point we decided that we’d stay in the car park next door (Again) and head for Lake Bohinji in the morning as it seemed more likely we could find a nice place to camp there.

We strolled around the lake, drank some Gluhwien, wandered around the town (Again) and took some pictures as the weather was a little better than before. 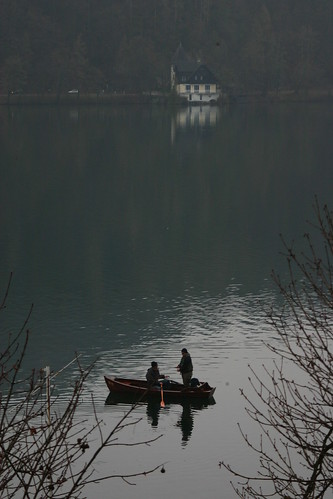 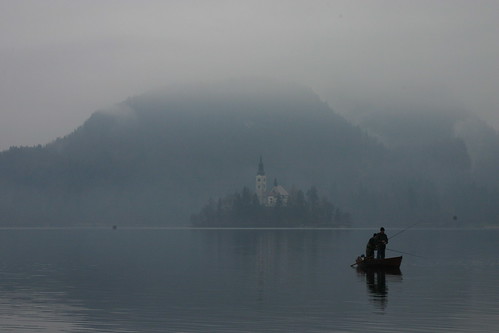 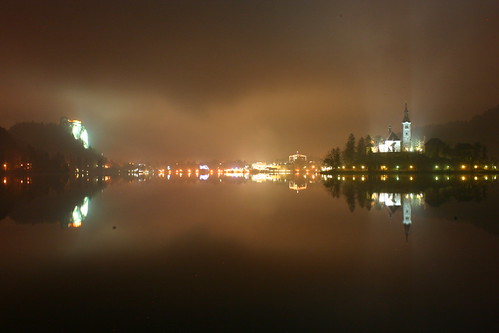 I had to get a pic of this as you just wouldn’t see this in the UK. They have clearly demolished a quite large house on this plot….but left the door? 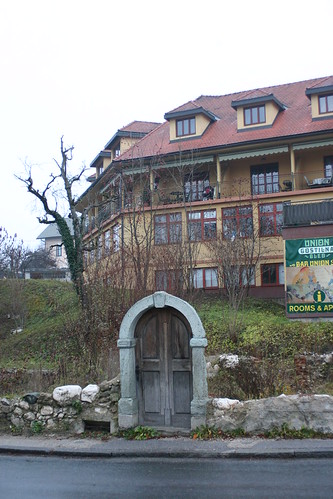 The next morning we left for Lake Bohinji. The guide books describe this place as follows:
“Resting in a near vertical mountainous embrace lake Bohinj is the perfect get away to commune with nature and experience amazing Slovenian hospitality. Hiking paths start from just about everywhere around the lake, leading both the casual and the extreme hiker into the heart of the Julian Alps.

This sounded perfect, and upon arrival we weren’t disappointed, the Lake was lovely, the surroundings seemed very quiet and beautiful, the only downside was that the weather was still hampering any decent views etc. So we decided to go on a bit of a hike to see a Slap (waterfall) that was nearby. 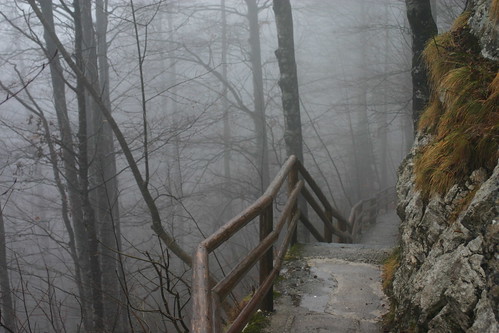 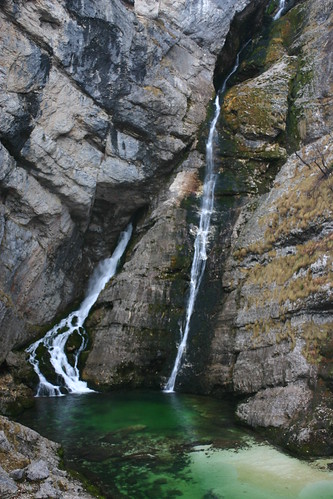 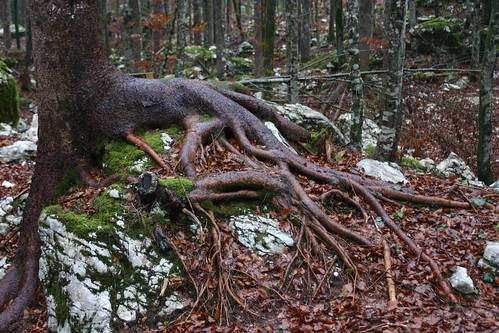 Well worth a visit if at Bohinji, i imagine it’s probably quite busy in season which would make it a bit of a different experience, but nice all the same. Was great to be there with not another soul around though and was a great place to visit in the weather we had, clouds kept rolling in and out of the valley occasionally giving glimpses of the river leading to the lake far below.

Once we got back to the van the light was fading so we made our way to a spot we had picked out earlier to stop for the night. Had some food, a couple of beers, turned on the heater as the temperature was dropping very quickly and settled in for the evening.

The next morning we woke up to something absolutely wonderful…….